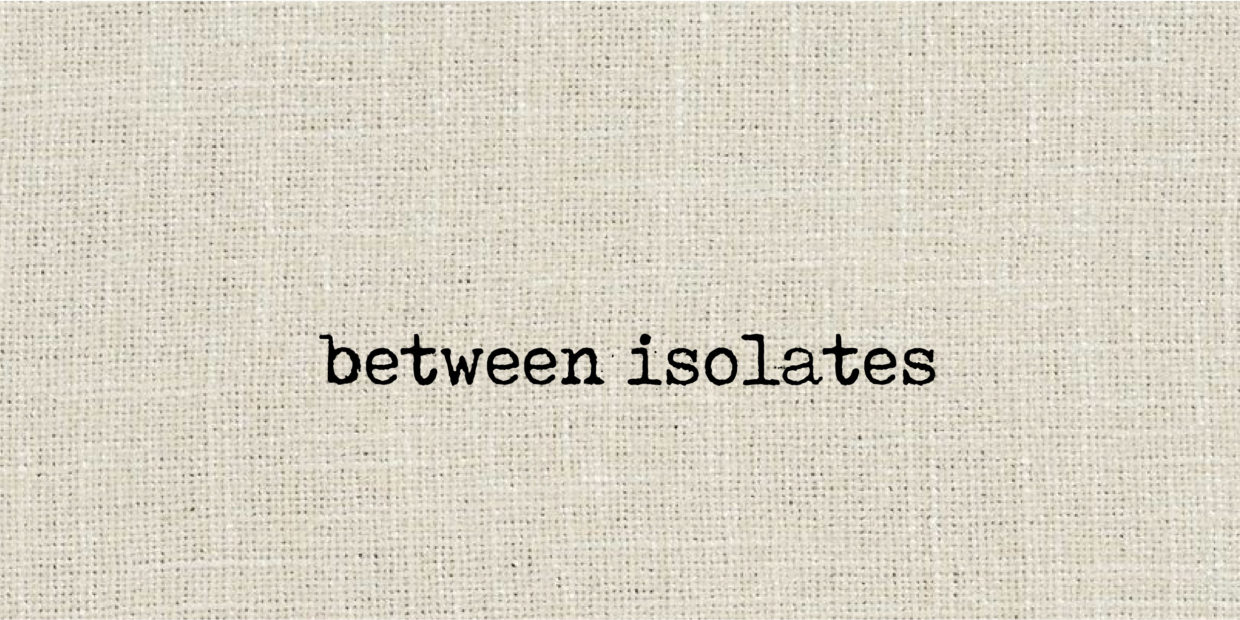 Manhattan is dark at night; quarantine has emptied the city. My window, on the 24th floor, is one of the few that is lighted in the grid of buildings around Washington Square. Inside, magazines pile up on the bare floor. I sit with my dog under a blanket on the couch. I have been reading about the lives of “homebound” New Yorkers a century ago:

A black man in his 80s whose apartment is a “fire-trap.” A home from which there is no escape.[1]

A former traveling paper-and-ink salesman, who settled for small scale itinerancy in New York City after his wife died. A white man in his 70s whose health waxed and waned, he moved between cheap rented rooms in the Bowery, hospitalization at Bellevue, and residence at the Municipal Lodging House next door. He occupied one metal bunk amid 4,500 in that shelter, built on the East River at 25th and now long gone.

A white woman, 80, with paralysis agitans, that old phrase describing the contrasts of Parkinson’s. She lived on the fourth floor and could “never get out of doors.”

Another white woman, in her 70s. “Should be in an institution,” owing to ankle and knee injuries, “but would rather live alone.” The children of friends brought food every so often, took away refuse.

The Oxford English Dictionary registers a new variant of homebound—formerly, “heading home”—in the mid 19th-century, when it began to mean “confined to one’s house, especially by illness or infirmity.” From movement to stasis. The word entered common usage when it was tethered to disability, a concept that was formalized in the field of social insurance (as opposed to private life or property insurance), starting state by state with worker’s compensation laws in the 19-aughts. In the 1910 Laws of New York, for instance, a short-lived amendment provided financial “damages” to workers in certain dangerous professions whose injuries resulted in incapacity for work. By 1913, this “incapacity for work” had become “disability” in a statewide Workmen’s Compensation Law that drew up elaborate schedules of impairments and payments. Disability might be temporary or permanent, total or partial. It was a category within which a range of impairments were tallied and assigned to classes of renumeration. Each finger of the hand, if amputated, counted for a different number of weeks off work at 662/3% salary. And yet the loss of one finger might be equivalent in worth—in the industrial labor setting—to a seemingly remote kind of impairment. Disability, in other words, allowed many different bodily states to become comparable, and to be regulated in a standardized manner. Disability referred to social functioning, with “social” reduced to labor.

The social insurance movement soon thereafter addressed the risks of aging and unemployment. Older people, in particular, were frequently left with no option but the almshouse if they fell on hard times. The United States lagged stubbornly behind other “modern” nations in this regard, only passing a Social Security Act in 1935 to provide benefits for workers who retired or suddenly found themselves unemployed, and to blind people unable to find work in the first place. The stock market crash of 1929, and rapid collapse of the trappings of modernity, forced the hands of American legislators. In New York City, after a third of residents lost their jobs, rows of shacks began to appear in Central Park, and a “packing box city” sprang up at the intersection of Houston and Greene streets—the corner where I now live.

Before Social Security, New York passed its own law in 1930 to give “relief” to indigent older people, in the form of monthly payments determined by one’s housing, food, and medical needs. By 1934, the commissioner of social welfare, David Adie, organized A Study of the Medical Needs of Recipients of Old Age Assistance in New York City. Sending 11 doctors into “the field” to conduct interviews and medical examinations of people receiving assistance in Manhattan and the Boroughs, Adie wanted a better estimate of the allowances required for medical care, and to know if aging could be disentangled from chronic illness and disability.

Adie proposed another classification scheme for disability, because older and retired people could not be evaluated based on their capacity for work. His four degrees of disability ranged from “no condition found that interferes with ordinary activities” to “able to be up and get about, to travel, to find recreation, to attend a clinic,” “homebound; i.e., not wholly confined to bed or chair,” and “bedridden.” An enormous assortment and combination of impairments might land one in any of these classes; disability signified diminished “capacity for normal living” rather than any specific physical condition. Certainly New York always had its share of citizens who remained indoors because of illness or quarantine, but here this spatial circumstance became a measure of disablement—a precursor to other functional status indexes, later renamed “quality of life” and “activities of daily living.”

What to make of being “homebound” as a kind of disability? Housebound was not an apt term, because no one lived in a house. There were the cold Greenwich village cellars, the Harlem tenements, the shacks in Red Hook’s massive Hooverville. Canvassing the city, the doctors made exhaustive, intrusive examinations of the older people they visited at home: auscultation; inspection of rectums for hemorrhoids and genitals for signs of disease; notes on stature, scalp, and facial expression; prodding here and there for masses and tenderness. But physical impairments, even added together, did not necessarily result in confinement or any other class of disability. One man, living in a cold water flat, had lost his hand in a shotgun accident as a child; he worked as a construction foreman, using a hook, and was only classified “disabled” late in life as he came into heart and bladder problems, poverty and frailty. Nor were physical impairments the inevitable sequelae of aging. This welfare study resulted in a weak “social model” of what influences disability: “diets, exercise, and rest” were as important as medication; the homebound often only lacked such “simple appliances as glasses, a truss, or an orthopedic shoe…companionship and occupational therapy.” Or money.

A more radical social constructionist take might suggest that anyone who is homebound—incapacitated for any reason from entering the physical public sphere—is disabled. And in the sense of participating in normative daily life, that is true. In the first two months of pandemic in the U.S., disability activists on social media have shared with everyone else their expertise regarding quarantine, tele-work, remote access, and remote intimacy. But disability was not yet identity in the 1930s; it would not be claimed as such until the end of the century.

Reading Adie’s 1934 Study while homebound in 2020, confined by the threat of illness to my home, I neither seek nor find identification. The homebound of the prior century were members of the same economic class, all surviving on meager allowances from old age assistance, yet even the physicians who lumped them together within the category of disability placed great emphasis on their differences—of race, gender, and past profession:

A white man, 77, once a children’s carousel operator. Hernia, hemorrhoids, cataract, you name it. He lived in a shack on the water in Brooklyn, hung around other shack- and “houseboat-people.” They helped each other. He wanted to live alone, against the doctor’s wishes, although what did “alone” mean in that situation? His poverty was whimsical. He was described as “inventive,” two patents to his name and a legal “windfall’ for what was presumed to be a false injury claim.

A black man, age 74, with epilepsy, arthritis, and heart disease, listed as living with strangers in “a dilapidated old house turned into a cheap tenement.” The man described himself as living with friends. The examiner implied that his family was broken, his son having abandoned him as well as his own children. He was said to be “satisfied with conditions as they were…his $34 grant ($1 for medical care) was evidently a lot of money for one person to have each month.” In other words, poverty was “good enough” for some people; maybe they deserved it.

Elsewhere, Adie noted that the homebound and bedridden elderly required less monthly financial support than the “up and about,” and yet seemed better cared for. Perhaps capitalism desires a greater degree of disability—and some must always live like this.

A white woman, 80, who also claimed to hold a patent for crocheting. The examiner doubted her; diagnosed senile psychosis. She resisted the thorough bodily examination and interview; he said she had a “disrespectful attitude.” She was “investigated” over the course of several years. A later note reads: “sexual delusions.” She moved in and out of a homebound state; in and out of cellars, hotels, and furnished rooms. For a brief period, from October 1932 to the following April, she lived in a light room and ate in restaurants. I root for her, but I know how quickly the bottom falls out. She was sent to Ward’s Island in 1934, to the state psychiatric hospital, one of the largest in the world.

These survey notes don’t quite amount to case studies. Reading into, and against the grain of welfare paternalism at a moment when all forms of social insurance are being dismantled in my country, I want to know what kinds of lives the first homebound-disabled New Yorkers made for themselves, on the cusp of social security. I want to know, what kinds of affiliation are possible between isolates?

[1] These opening vignettes, and all quotes that follow, are taken from: New York (State). Dept. of Social Welfare. A Study of the Medical Needs of Recipients of Old Age Assistance In New York City In 1934. Albany: J.B. Lyon company, printers, 1937. Lowercase black, and other conventions of the historical text, are used when citing or paraphrasing.